Len McDowall representing BlueMount Capital was privileged to attend the welcome ceremony at the Westin Hotel to welcome Premier Li to Sydney.

Australia and China found unprecedented common ground during Chinese Premier Li Keqiang’s visit to Australia this week.
Premier Li and Prime Minister Malcolm Turnbull are statesmen united in opposition to a common foe: trade protectionism. Addressing an economic forum in Sydney, neither mentioned the United States or President Donald Trump by name but the subtext was as clear as the symbolism.

With President Trump pledging to protect US business against foreign competition, Australia is being positioned as a partner in China’s opportunistic campaign to be seen as the new defender of globalisation and free trade champion of the world.

The Prime Minister told a ballroom packed with businesspeople and politicians at the Westin Hotel that “the cooperation between China and Australia showcases to the region and the world our determination to defend trade liberalisation and advocate the benefits of free trade.” 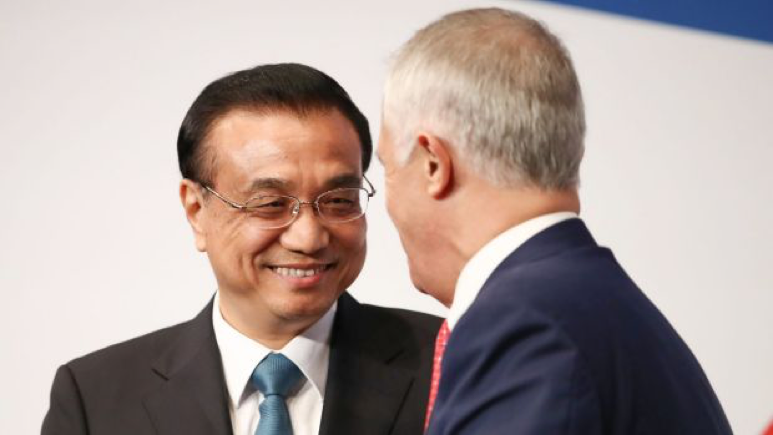 Premier Li, following Mr Turnbull at the podium, matched his rhetoric, then raised it. He said the China-Australia Free Trade Agreement (ChAFTA) would “show to our region and the world that free trade will deliver benefits to all human beings”.

“If China and Australia join hands they will not only bring benefits to the people, but also to the region, to show the world that … with the example of our co-operation, by working together we will move forward and promote greater progress of mankind.”

Mr Turnbull said he had spoken with Premier Li about working together to conclude the Regional Comprehensive Economic Partnership, the rival China-led 16-member initiative excluding the US which has usurped the TPP as the front runner for new free trade deals in the region. 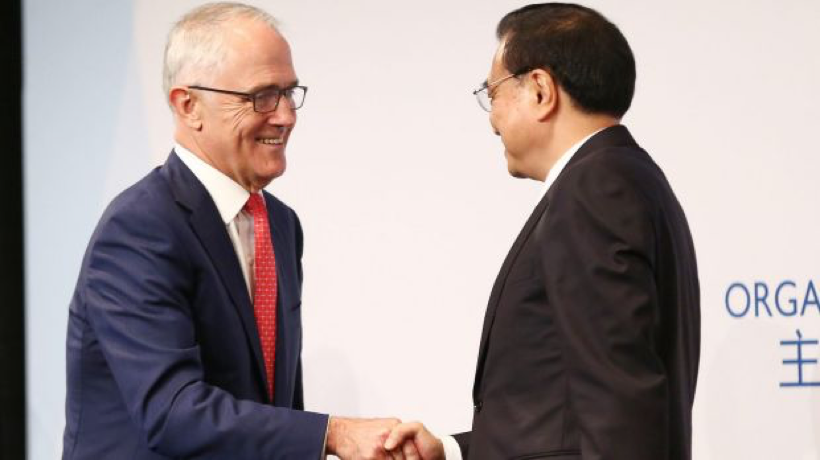 According to Hugh White, professor of strategic studies at the ANU, this is how America’s long era of leadership in Asia comes to an end.
“As a result of Mr Trump’s approach, Australia will drift away from America and move closer to China,” he wrote in The New York Times. “That does not mean we Australians will become Beijing’s ally, but it does mean we will begin tacitly to acquiesce to China’s claims to regional leadership.”

“It is an opportunity for China to rhetorically and symbolically look like it is building closer relations with Australia and the US for the time being is on the outer,” said Merriden Varrall, director of the East Asia program at the Lowy Institute.

China is Australia’s largest trading partner with two way trade in 2015/16 valued at $150 billion. The headline deal of Premier Li’s visit allows unfettered access for Australian beef to the Chinese market which is expected expand exports of chilled beef especially from the current $1 billion worth