Home / News / BlueMount News / How Does a Stock Move from the OTC to a Major Exchange?

How Does a Stock Move from the OTC to a Major Exchange?

There are many reasons why a company may trade on the Over the Counter (OTC), which unlike a standard exchange, has no physical location, but it’s not an option that provides much exposure or even a lot of liquidity. Trading on a major  exchange, though, does. But is there a way for companies to move from one to the other?

OTC vs. Major Exchange: An Overview

OTC securities are those that are not listed on an exchange like the New York Stock Exchange , Nasdaq or the Australian Securities  Exchange (ASX). Instead of trading on a centralized network, these stocks trade through a broker-dealer network. Securities trade on the OTC because they don’t meet the financial or listing requirements to list on a major exchange. They are usually low-priced and are thinly traded.

Securities listed on major stock exchanges, on the other hand, are usually highly traded and priced higher than those that trade OTC. Being able to list and trade on a major exchange gives companies exposure and visibility in the market. In order to list, they must meet financial and listing requirements, which vary by exchange. For instance, many exchanges require companies to have a minimum number of publicly-held shares held at a specific value. They also require companies to file financial disclosures and other paperwork before they can begin listing.

It is possible for a company that trades OTC to make the leap to a major exchange. But, as noted above, there are several steps it must take before they can list.

Companies looking to move from the OTC market to a major exchange or dual list must meet certain financial and regulatory requirements.

The company and its stock may need to meet listing requirements for its price per share, total value, corporate profits, daily or monthly trading volume, revenues, and Government reporting requirements.

Second, it must be approved for listing by the major exchange by filling out an application and providing various financial statements verifying that it meets its standards.

While a lot of fanfare may occur when a stock is newly listed via a dual listing on a major exchange—there isn’t (strictly) a new initial public offering (IPO). Instead, the stock simply goes from being traded through the OTC market to being traded also on the major exchange.

There are a variety of reasons why a company may want to transfer or dual list on a bigger, official exchange. Given the size of major exchanges , companies that meet the requirements of the major exchange choose to move their stock there for increased visibility , liquidity and ability to raise capital.

In the past five years there has been a marked increase in the number of international companies listing on the Australian Securities Exchange (ASX). Why is this happening? What are the thought processes and market dynamics that attracted these companies to list on the ASX? Where these companies are U.S. based, what were the factors that stimulated them to look outside their home capital markets? Are the experiences of these companies relevant to your own capital raising considerations?

As of November, 2020, there were over two hundred and seventy foreign companies listed on the ASX. Of these, forty-seven were US based companies, the second largest international pool of listing companies behind New Zealand. The US cohort of companies range across industries but the recent trend has been in the technology sector. The ASX-listed tech sector has more than doubled in the past five years and continues to be Australia’s fastest-growing sector in terms of new listings. The ASX saw one hundred and six new listings in 2018, one hundred and twenty-three in 2017, compared with one hundred and eight new listings in 2016 and one hundred and nine in 2015. The percentage of foreign IPOs on the ASX has been growing steadily from around two point five per cent in 2008 to around twenty-five per cent in 2016, 2017 and 2018.

Good examples of US companies listing in Australia include: 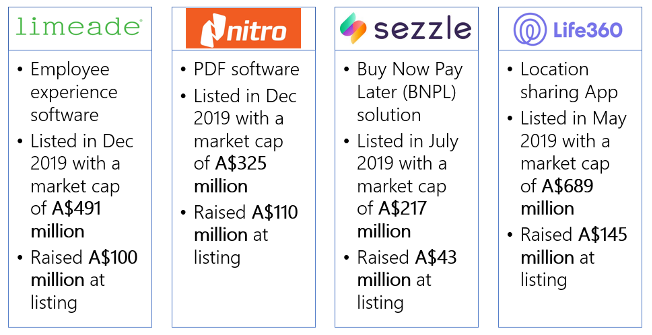 These figures may not tell the whole truth. The ASX uses a sector classification, which employs a relatively narrow definition for technology, meaning that there are also ‘tech’ companies in other sectors. For example, there are approximately forty fintech companies listed on ASX, many of which fall in the financial sector classification. For example, of the forty-six American companies who have listed and raised capital on the ASX. Many, including the likes of Resmed (RMD) (medtech), , Revasum (semiconductors) and Livetiles (software) are technology-driven companies but are classified in sectors other than technology.

In fact, the ASX, in partnership with S&P Dow Jones Indices (S&PDJI), in February of 2020, launched the S&P/ASX All Technology Index (All Tech Index). The new index captures ASX-listed companies in the fast-growing technology sector. The All -Tech Index operates under an S&PDJI methodology and at launch will have forty-six constituents with a combined market capitalisation of over $100 billion. In total, there are more than 200 listed technology companies listed on the ASX valued at almost $115 billion. This initiative has reinforced the perception of the ASX as the Junior NASDAQ.

What is driving this trend?

Has Australia, and the ASX in particular, features that are comparatively attractive to US companies or is the case that the US capital market has a number of unattractive features that drives them to look outside their home turf?

Many early-stage companies are listed on the ASX. Usually, in the US and other major markets, such young companies are considered as mid-stage or late-stage pre-IPO growth firms, and they seek venture capital as Series B, Series C, Series D, etc. or they may be traded on the OTC.

Size matters. A  study of the reasons US companies list abroad concluded that the primary factor was the size of the company. Companies with revenue of less than US$100 million can attract public market capital in Australia whereas for US companies of this size the only real alternatives available are private equity markets with all of their associated pitfalls. In this regard the Australian “sweet-spot” is for global companies with market caps of between A$100 million and A$1 billion.

Within this Australian sweet-spot band of investable company size, Australian investors accept investing in high-risk young firms that are still figuring out their growth-model. The key advantage for investors is that growth companies listed on the ASX, expands the universe of available investing options. In particular, the ASX is a great environment for attracting the attention of media, stock analysts and investors.

Australia has the fourth largest pension pool globally and also one of the fastest growing. The pool of superannuation (pension) assets is disproportionately large compared to Australia’s population. Superannuation assets currently total A$2.6 trillion and is forecast to grow to over A$10 trillion by the mid-2030s. A significant proportion of this is, and will be invested in ASX listed stocks.

The reason behind the size of the Australian pension pool is the compulsory superannuation system . Employers contribute towards superannuation funds on behalf of their employees for their retirement. The current rate is 9.5% with a planned increase to 12% by 2025. Due to the superannuation funds’ structure, much of the capital is invested in Australian listed stocks and companies, making for a very fertile investment ecosystem.

The sheer weight of this pool, where a large percentage is mandated to invest directly in ASX-listed securities, makes the Australian market an attractive venue for international companies looking to access growth capital.

In addition to capital, an ASX listing offers a number of other benefits for an international company looking at global public markets. These include a highly active exchange, a main board listing and earlier entry to globally recognised indices. Australia is an attractive listing venue for international companies from a number of different markets but these can be broadly characterised by (i) companies located in a constrained home capital market and (ii) those where size can cause them to be lost in their home market.

Companies from large capital markets, such as the United States, also benefit from the Australian market dynamics. The size of the US public markets means that earlier-stage companies, with annual revenues below US$100 million or valued at US$1 billion market capitalisation or less, struggle to foster investor attention.

The US private markets are the most active globally and high-profile companies such as Uber, Spotify and Airbnb have held off listing until they are well beyond that size. This means there is a whole generation of companies that would prefer to access the public markets, versus private funding, at an earlier stage, but their home exchange cannot support this.

ASX is bridging the gap for companies in these larger markets that would like to use the public markets to raise growth capital and can use ASX as a springboard to reach a size where they would attract attention in their home market.

ASX offers a main board listing, which provides a globally recognised robust regulatory environment and access to the full breadth of investors from retail to global institutions. Access to the main board for earlier-stage growth companies is in contrast to an OTC or  junior board listing where full access to the investor base can be more limited.

Often, institutional investor mandates stipulate fund managers limit their investment to a globally recognised exchange and not extend to many secondary boards or smaller main boards, examples of which are the AIM market in the UK, TSX-V in Canada, GEM in Hong Kong and Catalist in Singapore.

Index inclusion is another key factor. ASX has three globally recognised S&P indices, the S&P/ASX 300, S&P/ASX 200 and the new S&P/ASX All Technology Index. The importance of index inclusion to a listed company is the access this provides to institutional investment, both passive and active.

Institutional mandates are typically mandated to a recognised index and when a company enters an index it will lead to extended investment reach, both domestic and global, as that index weight increases.

For example, institutional investment in the S&P/ASX 200 index comprises of about forty-five per cent from global asset managers and fifty-five per cent from Australian, meaning companies listed on ASX can have a register of globally recognised investors at an earlier stage than other markets.

What will your next step be?

Australia, and in particular the ASX, has many features that can generate benefits to companies considering and an IPO or a dual listing. BlueMount Capital specialises in bringing US companies to the ASX, and has an office in Los Angeles to service its American clients. Why not contact us and evaluate what we can add to your IPO or dual listing considerations?

(For further discussion of the reasons listing in the US market may prove unattractive to a company see the first in the series of BlueMount Capital publications, “IPO in the United States? Remember, size matters!”)

Acknowledgement : BlueMount acknowledges the assistance of Investopedia in providing some of the content of this article.